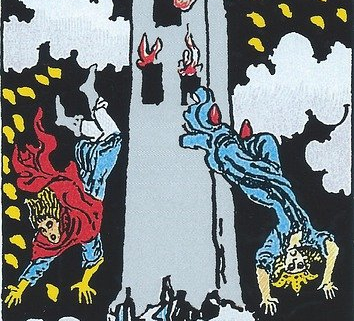 Five often represents a challenge or conflict that needs to be addressed. In Tarot it’s related to the astrological fixed energy or quality. It’s rooted, static and resistant to change.

The Emperor IV contains a V (5). It represents a father figure leadership and unyielding power. It’s astrological element is fire which is action oriented and inspirational. The ruler is Mars the warrior in astrology.

The Lovers VI A possible union or partnership requiring a sacrifice and a decision. The Astrological element is air the ruling planet is Mercury.

The Chariot VII is about overcoming conflicts and moving forward in a positive way. It requires willpower, determination, commitment, and conviction to be victorious. It can represent control, war and revenge seeking.

The astrological element is water (Cancer) the ruling planet is the Moon.

Strength VIII  The image is of a woman with her tamed Lion. Strength of character tamed the beast indicating a triumphant victorious outcome. It’s about self control and courage. This is related to the sign Leo ruled by the Sun. It’s element is fire.

Temperance XIV Patience and balance is required here. The Tarot card depicts a figure pouring water from one location to another, It’s element is fire (Sagittarius) and the ruling planet is Jupiter.

The Tower XVI is commonly interpreted as crisis, danger destruction and liberation. It’s associated with sudden unforeseen change, a volatile situation, and catastrophe. It can indicate bankruptcy and being ousted or overthrown. The planetary ruler is Mars, fire is the element. Mars applied to the Tower indicates combative destruction by a rousing force.

The Moon XVIII   The moon is a depiction of illusion and obfuscation.  The moon is associated with suppressed emotions. It’s about the past, possessions can bring back memories. It’s also about transformation elevating from one lower stage to a higher one. It represents intuition and creativity it’s associated with Pisces and is in the water element. The ruling Planet is the Moon.

These divinatory exploration practices: Astrology Numerology and Tarot work well in concert and reveal   a multitude of information to our questions.  They are often overlapping in their revelations.