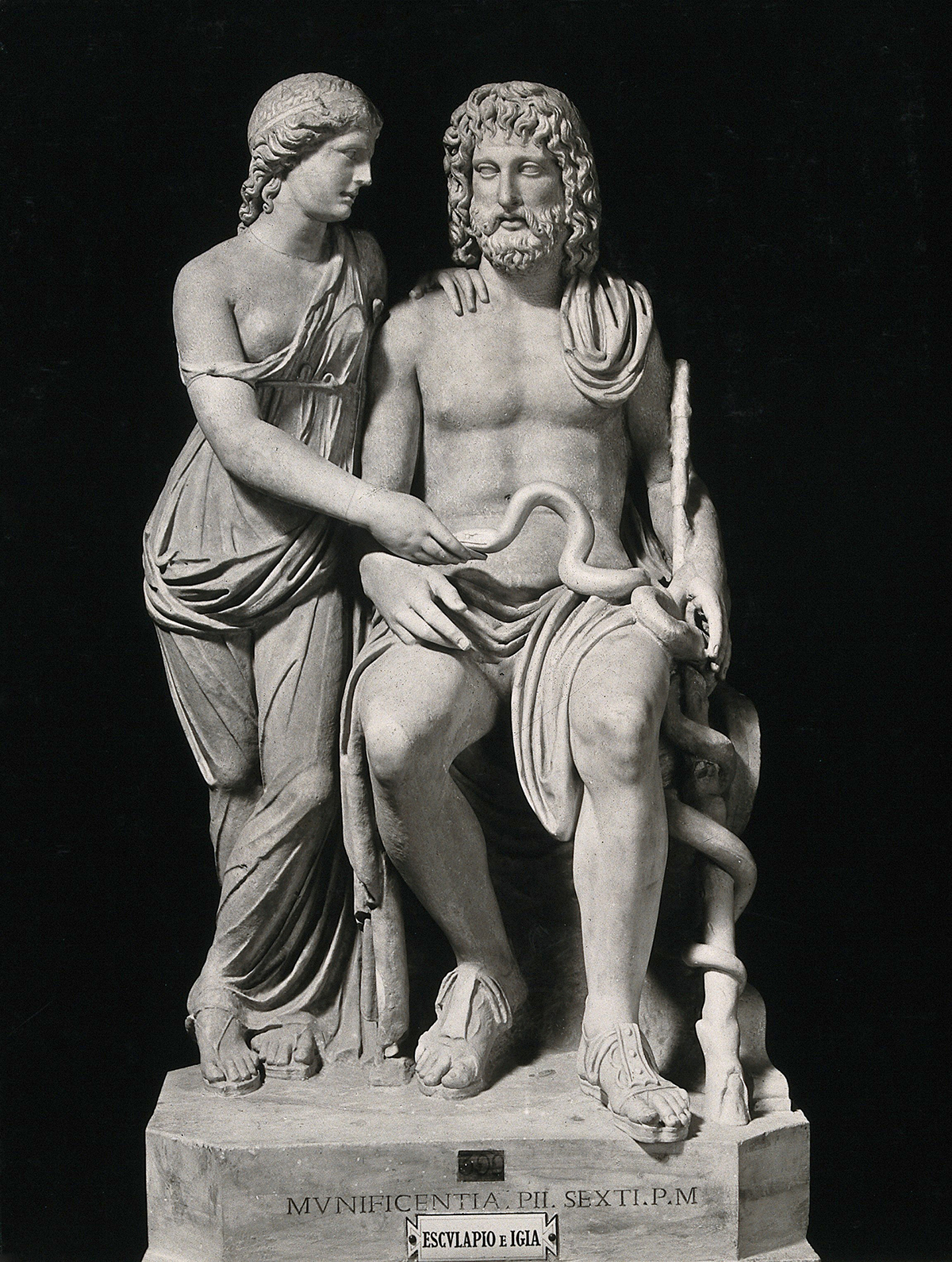 Apollo named the rescued baby “Asclepius” and reared him for a while and taught him many things about medicine.  However, like his half-brother, Aristaeus, Asclepius had his formal education under the Centaur Chiron who instructed him in the art of medicine.

It is said that in return for some kindness rendered by Asclepius, a snake licked Asclepius’s ears clean and taught him secret knowledge (to the Greeks snakes were sacred beings of wisdom, healing, and resurrection). Asclepius bore a rod wreathed with a snake, which became associated with healing. Another version states that when Asclepius (or in another myth Polyidus) was commanded to restore the life of Glaucus, he was confined in a secret prison. While pondering on what he should do, a snake crept near his staff. Lost in his thoughts, Asclepius unknowingly killed it by hitting it again and again with his staff. Later, another snake came there with a herb in its mouth and placed it on the head of the dead snake, which soon came back to life. Seeing this, Asclepius used the same herb, which brought Glaucus back.  A species of non-venomous pan-Mediterranean serpent, the Aesculapian snake (Zamenis longissimus) is named for the god.

He was originally called Hepius but received his popular name of Asclepius after he cured Ascles, ruler of Epidaurus who suffered an incurable ailment in his eyes.  Asclepius became so proficient as a healer that he surpassed both Chiron and his father, Apollo. Asclepius was, therefore, able to evade death and to bring others back to life from the brink of death and beyond. This caused an influx of human beings and Zeus resorted to killing him to maintain balance in the numbers of the human population.

At some point, Asclepius was among those who took part in the Calydonian Boar hunt.

Asclepius once started bringing back to life the dead people like Tyndareus, Capaneus, Glaucus, Hymenaeus, Lycurgus, and others.  Others say he brought Hippolytus back from the dead on Artemis’ request and accepted gold for it.  It is the only mention of Asclepius resurrecting the dead. In all other accounts, he is said to use his skills simply as a physician.

However, Hades accused Asclepius of stealing his subjects and complained to his brother Zeus about it. According to others, Zeus was afraid that Asclepius would teach the art of resurrection to other humans as well.  So he killed Asclepius with his thunderbolt. This angered Apollo who in turn killed the Cyclopes who made the thunderbolts for Zeus. For this act, Zeus banished Apollo from Olympus and commanded him to serve Admetus, King of Thessaly for a year After Asclepius’s death, Zeus placed his body among the stars as the constellation Ophiuchus (“the Serpent Holder”).

Later, however, upon Apollo’s request, Zeus resurrected Asclepius as a god and gave him a place on Olympus.

So why are we learning about these two medical marvels? Asclepius was discovered in 1923, the same year insulin was discovered. This is important now because the Asteroid Asclepius will be 10° away from the Great Conjunction of Jupiter and Saturn at 0°29’ Aquarius on December 21, 2020. This is well within orb to be considered a conjunction. “Coincidentally” Hygeia is in opposition to him at 15°5’Rx Leo.

These two are at work in spreading healing to the world!

This great conjunction in Aquarius is about originality and scientific invention. Aquarius rules connections and distribution to the masses. Jupiter is giving us hope and optimism, while Uranus the ruler of Aquarius lifts us up from a grave situation. Saturn provided the hard work and dedication of many to save millions of lives. Jupiter and Uranus are about humanitarian issues. They are providing hope and relief, as well as highlighting social change and political reform. Uranus is about risk-taking, original thinking, and implementing new ideas. It’s building on Saturn’s proven base of successful protocols. Jupiter is expanding this optimism in a warp-speed fashion.

We are experiencing a universal boost to this Great Conjunction in air signs. It’s a revolutionary renaissance of wisdom and information to lift up humanity. It’s adding to our arsenal of weapons to use against future pandemics. The purpose of the twenty-year Jupiter Saturn conjunction is to restore balance in all areas of life. Social and economic issues will be addressed.

“Jupiter is an ennobling influence”.

The broad-mindedness and the ability to consider others are amplified by the Aquarian influence. It’s the universal consciousness’s unfoldment to a higher plane. Saturn provides a check on the ennobling influence by making sure it is manifested into the concrete realization of the human potential. Not just hopes, wishes, and grandiose braggadocio, but truly successful growth based on accomplishment. Jupiter rules horses and automobiles but to ride without reins or brakes is inviting disaster. We have to have Saturn’s balance and limitations to keep the wheels from falling off.

The Age of Aquarius

The Partial Eclipse In Taurus, Emergence Of The New Renaissance
Scroll to top