In March, our leader was on Don Cerow. He presented information based on his book, The 8th Seal: Its Time Is Now!. Due to the coronavirus outbreak, we had our March event on Zoom. I think it went well and we had great attendance. Thank you all!

First he listed some events in the world that resonate with his claim that the time is now, then he launched into his beautiful presentation. The presentation was organized according to the 22 chapters of the Book of Revelation at the end of the New Testament in the Christian Bible. He has interesting ideas about the symbolism used by the author and has made some correlations with the constellations and events in the sky.

In the early chapters of Revelation, there are letters to the Seven Churches. Don correlates these seven cities to each of the seven planets based on what was said in the verses, the cities’ associations with particular pagan gods and goddesses and the sign of the associated planet’s exaltation.

After that Don spoke about the symbolism in Chapter 4, a new realm of the heavens and how they confer their energies. The gems can be associated with particular planets and the numbers correspond with measures of time and astrology. The 24 thrones can represent the 24 hours in a day and the associated planetary rulers. The 7 lamps can represent the 7 planets and the 7 days of the week and the associated planetary rulers. The 4 animals correspond to the 4 seasons and the 4 fixed signs. They are listed in “reverse order” starting with Leo, as they would be seen in the sky due to the precession of the equinoxes. These time based symbols never stop singing praises to the Almighty on the Throne “who was, and is, and is to come”. There is an interesting element of time and timelessness here. 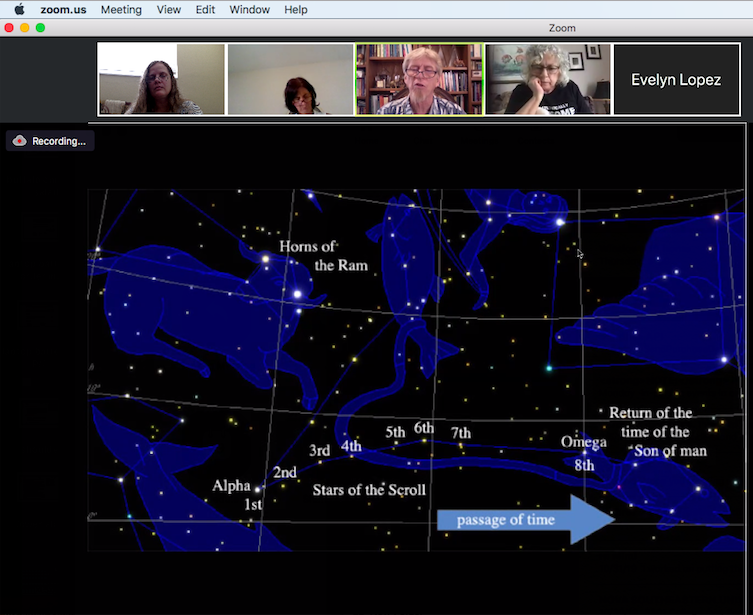 Don also roots the seals in Chapter 5 of the Book of Revelation to the stars visible in the Northern Hemisphere. 0 degrees Aries is the fusion between Heaven and Earth. It is where the RAM begins, the Lamb is born.

As the celestial equator of the vernal equinox moves down the ecliptic, it hits particular stars and triggers them at particular periods of time (breaks the seal). Don correlates the 1st seal with the star Al Rischa. This star was triggered in 407 BC. Through the presentation, Don named each of the 7 stars, gave the time period and told us some of the history of the time. These times correspond with periods of conquest, war, transitions of power and other demonstrations of power over people.

According to this presentation, the first three seals had already happened at the time Revelation was written. The remaining seals correlate a little less with the verses, but they correspond with times of challenge for the Roman Empire and the Church. The 7th seal is Delta Piscium, triggered in 1052. This timing corresponds with the split of the Church and its empire. After this, Rome is only a city state.

Don continued through the chapters of Revelation, giving us his interpretation of the symbolism.

The Dragon and the Beast

Another interpretation I want to mention here is about the Dragon and the Beast and observational astronomy. 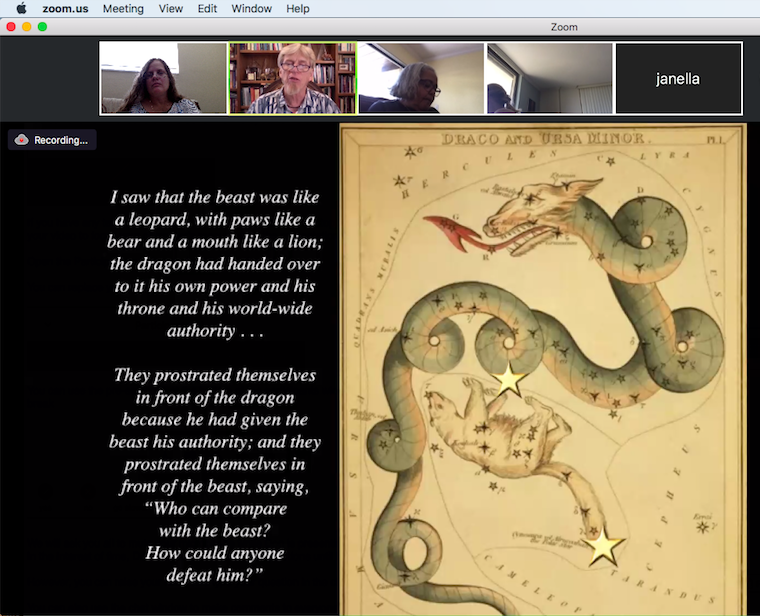 The Dragon corresponds with Draco, the guardian of the Celestial North Pole.

To draw a circle, the vernal equinox is east. Determine the North Star to draw the circle for navigation. Draco used to have the North Star, the star in the center of the page. Now, due to the precession of the equinoxes (caused by a wobble in the earth’s axis), the best star to use for North is the one toward the bottom in Ursa Minor. The star is giving up its power, it’s not for navigation anymore. The correlation is the Dragon (Draco) giving its power and authority to the Beast (Ursa Minor).

Don has also determined the timing of the 8th seal, after Revelation ends. The 8th seal was triggered on February 11, 2013, about 7 weeks after the Winter Solstice of 2012. On this day, Pope Benedict became the first Pope to resign. On that same day, lightning hit the Vatican, which echoes the symbolism in Revelation and continues the theme.

Don also answered questions for us, and we had many!

For more of his ideas, read the The 8th Seal: Its Time Is Now!” book!

It was an enjoyable day, despite our inability to get together in person. We hope you can join us for the next one!