Aspects describe the relationship between the planets in the astrology chart.

Traditionally, five main aspects are used. These five aspects are based on the division of the astrology chart into 12 signs, each with 30° of the circle. The signs have different characteristics ( polarity, quadruplicity and triplicity ) and they are arranged in a particular order. The signs match and contrast with each other in different ways. The interpretation of the aspect patterns has been influenced by those qualities.

With the 5 traditional aspects, not all of the “slices” of the chart are related to one another. The idea is that the planets in some relationships cannot “see” each other. In these cases, there is no relationship between them. There is no aspect.

In the following aspects, the planets can “see” each other and their relationship is generally interpreted as described. However, in actual charts, other factors are considered that will modify the interpretation of the aspect. These are called mitigating factors.

Astrologers also have to determine how close to exact they will require in order for a relationship to be considered as an aspect. This is called an orb. I think of it as “the orb of influence”. As you get farther away from exact, the aspect will be less evident. Orbs vary considerably between astrologers and many astrologers use different orbs for different aspects.

Some aspects will fit within the orb, but one of the planets may be in a different sign than the expected one described below. This is called and “out of sign aspect” or a “degree based aspect”. Most astrologers do use these aspects, especially if the orb is tight. However, the interpretations may be adapted in those cases. 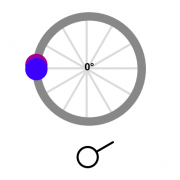 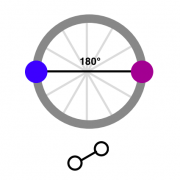 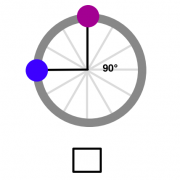 A square is a 90° relationship between the planets. The signs involved in a square relationship have the same mode of operation (quadruplicity), so they may have the same level of initiative. However, they have opposite elements and polarities so the way they want to do it is completely different from each other. Squares are associated with challenges and friction. This friction can cause people to take action, so squares are seen as motivating and challenging. 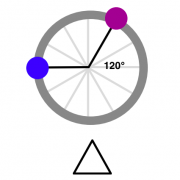 A trine is a 120° relationship between two planets. The signs involved in a trine are the same element (triplicity) and polarity, so they have a similar approach. Trines relationship are considered harmonious, smooth and flowing.

A sextile is a 60° relationship between two planets. In this case, the polarity is the same and the element (triplicity) is not the same, but it’s a compatible element. Sextile relationships are considered harmonious, but they are not as harmonious as a trine.

These aspects are often classified as “hard” and “soft”. The soft aspects are smooth and flowing relationships such as the trine and the sextile. The hard aspects are the more difficult aspects with some friction, including the square, the opposition and in some cases the conjunction. The energy of soft aspects flows naturally and easily between the planets in the relationship. The energy of hard aspects can cause friction or challenges, but this can lead to motivation and growth.

There are also astrologers that use other divisions of the circle like the quintile (1/5), the septile (1/7) and the novile (1/9). These are called minor aspects. The circle can actually be divided into any number of “slices”, and that is done in some forms of astrology such as Harmonic Astrology and Vibrational Astrology.

It is also important to note that the relationships visible in the astrology chart are based on longitude so the planets may not be next to each other in the sky. Astrologers who want to account for the latitude also consider the declination graphs and may use parallel and contra parallel aspects.

* Copied with permission from notjustdetails.com