Interpretation by Susan Vega of the South Florida Chapter NCGR

A Solar Eclipse is an invitation to a new beginning.

Saturn rules the chart and Libra’s the Ascendant, giving Venus importance as well.

Relationships are important, and money is high focus too.

The Sabian Symbol for the New Moon:

Indians on the warpath while some men row a well filled Canoe, others in it perform a war dance.

The Sabian Symbol for the Saturn Venus 29 Capricorn 30’ midpoint is:

A secret meeting of men responsible for executive decisions in world affairs.

Jupiter is conjunct the new Moon which is good luck in general, but also is good luck in legal affairs since Jupiter rules the law. This Solar Eclipse occurs on Thursday which is Jupiter’s day. In the chart Jupiter is in Fall due to its opposition to its exaltation sign Cancer. There is a planetary assist here because Jupiter’s solstice partner Mercury at 25 degrees of Sagittarius 21’ can trade places with Jupiter at 5 degrees Capricorn 20’. It acts like a negative to a picture. This is very interesting since Mercury conjunct the Moon acts sort of like Gemini the information gatherer, also Mercury is dignified by its 3rd house position. Mercury in Sag would mean the news being gathered is from or about foreign countries. This brings us to a conclusion that this news could assist in a legal case because of this Jupiter relationship. Since this eclipse is happening in the sign of Capricorn which rules government, we can expect more excitement during the holiday season than we normally have. The Sabian Symbol for Mercury is: A flag bearer in a battle. Jupiter’s Sabian symbol is: Ten logs lie under an archway leading to darker woods. It’s interesting to note that there are supposed to be 9 Supreme court justices. The judge kicking the case up to the supreme court would make the 10th.

The new moon trines Uranus, and it’s important to note that Uranus and Venus are in mutual reception Taurus and Aquarius respectively. This means they can trade places or blend energies. Venus in the 5th house in Aquarius and Uranus is in the 8th house in Taurus. The 5th house is talent, risk taking, gambling, and creativity. Venus (money) in Aquarius (distribution of), it would also be about networking. The 8th house is other people’s money. Uranus is in fall because it exalts in Scorpio, but the shape shifting with Venus helps Uranus out. Taurus is ruled by Venus and they both rule money.  Mars is in the 2nd house of money in Scorpio. Scorpio rules distribution of money and with Mars there it’s action into investigations. The Sabian Symbol for Mars is: An X-Ray photograph. Sort of like the negative to the picture we spoke of with the Mercury Jupiter solstice relationship. Mars is sextile to Pluto so its an assisting influence to Pluto’s power of transformation.

The Sabian Symbol for the New Moon Saturn midpoint on the South Node is: A fire Worshiper meditates on the ultimate realities of existence. Sounds like taking a purely spiritual view of this Eclipse might require some extra effort on our part. The North Node in Cancer demands security. There’s no denying the principle of as above so below. 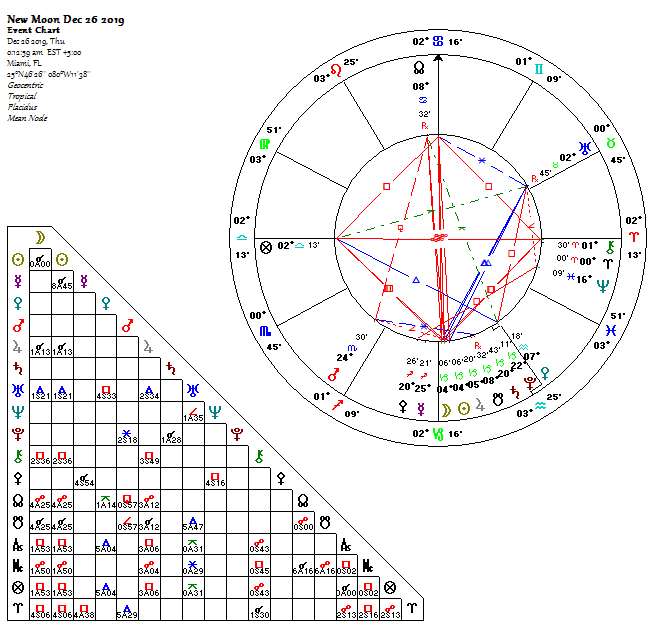