Venus retrograde in Gemini is always about communication.

Venus retrograded in Gemini in 2004, new innovation continued and the Apple iPhone was introduced in 2007, this changed how we communicate.

The last retrogrades in Gemini were the years:

The Sabian symbol for the degree at which Venus went retrograde 22°/23° Gemini is: “Three fledglings in a nest high in a tree”. A fledgling is a young bird that has grown enough to acquire its initial flight feathers and is preparing to leave the nest and care for itself, but is not experienced in flight.

It could refer to a fledgling democracy or person, an untried or inexperienced country or person.  A young bird which has just developed its flight feathers (notably wings). An immature, naïve and/or inexperienced person. 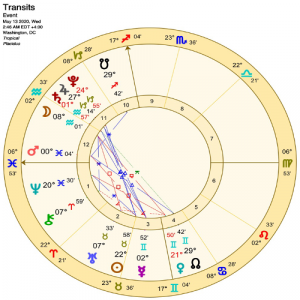 The chart shows the retrograde of Venus in Gemini. Mercury, the landlord of Venus, is strong in its own sign. It’s trine Saturn in Aquarius in the 12th house. Saturn is restricting freedom. Venus is in detriment, and is square to Neptune in Pisces, indicating illness, confusion, and deceit.  Mars is angular in Pisces conjunct the ascendant and trine the North Node in Cancer, an out of sign trine. Action taken to mitigate an illness and protect the people, or an aggressive spread of a contagion. The Ascendant ruler Jupiter is in Capricorn conjunct Pluto in the 11th house of groups. There’s a trine from Jupiter Pluto to Mercury in the 3rd house of communication and local neighborhood. Trines have a reputation for being an easy aspect. In fact they indicate no obstacles, an easy flowing aspect. Jupiter trines show up often in death charts indicating a quick passing. Jupiter sends you off for the long last journey to a foreign plain. In our current landscape the trines can indicate the exponential spread of a pandemic agent, a new disease and a quick death of millions of people. This disease attacks the lungs, ruled by Gemini.

When Venus goes retrograde, she connects you to the more instinctual, primal side of the archetype. This process is symbolized in mythology in stories of the goddess (or god) descending into the underworld and returning with hidden knowledge of the mysteries of life and renewal.

For example, Inanna, the Sumerian goddess of love and war, descends into the underworld and is stripped of everything she values. When she returns to the world, she reclaims the items she lost in the descent, now transformed through an encounter with her dark side.

Retrogrades carry with them a certain promise that there are lessons to be learned relative to the retrograde planet, Retrograde also means return. Venus retrograde may possibly take one back to a former lover. Remember, there’s a lesson still to be learned, but the circumstances will not be the same as they were previously.

On May 4th Venus will square Neptune causing  confusion, mistrust and possible deceit. Be honest with your communications with your partner, don’t jump to conclusions about the state of your relationships. Your feelings will not be clear and you could end up making rash or bad decisions. Venus remains square to Neptune throughout its stay in Gemini. Confusion with communication is rampant in general.

On June 2nd, Venus in Gemini in the  3rd house Squares Mars in Pisces in the 12th it will cause additional conflict with your personal relationships. It may involve arguments or power struggles. In general, it will be a frustrating time in your relationships, but it will bring to the surface past issues that may need to be addressed. Mars in Pisces can be a passive aggressive energy dynamic. Mars a fast fire sign doesn’t function well in a Pisces water world.

Venus is a dual archetype and has both an earthy and a celestial dimension, as shown by its rulership of Taurus and Libra. The Taurean earth Venus is sensual and instinctive and is concerned with natural bodily desires and appetites. The Libran air quality Venus is idealistic and cerebral and sociable, so it’s about ideas about relationships, acceptability, and equality. The challenge with Venus is to balance both sides of its nature. In other words, you need to align your ideals with your instincts. With Venus retrograde under the rulership of Mercury she may not rise to the challenge of being the embodiment of the “Ideal” that Mercury in Virgo demands she is falling off her pedestal ( apparently that’s how her arms broke off in the Venus de Milo statue) (a little levity there!) She has to be flexible with Mercury’s communication needs in Gemini where she is currently retrograding in 2020. Gemini’s curiosity is surely fed with many more internet searches, reading of books, and binge watching television shows. This fills the gap left empty by the lack of local travel since it’s being prohibited.

Venus’ brilliance as the brightest star has been linked to love. Today, her astrological meaning emphasizes the concept of unification, that of bringing things together. Venus attracts and rules values. Venus will attract others with the same values that you hold, unifying and establishing relationships. Working together for the common good, like” New York Strong” during the COVID-19 Pandemic.

The Planet that rules love, money, your values, and beauty, is moving backwards.

In your birth chart, find the house area that contains Gemini. This is the area of your life that will undergo the retrograde themes of delays, review, revision and second chances and even more of a Mars aggressive energy regarding communication. When Venus is retrograde she acts in more of an opposite way to her normal nature.

Diplomacy, fairness, equality, relationships may seem like a memory when cornered in quarantine. Money ( Venus) retrograde for all of us now. Finances have to be re- examined.

Communication and travel have been restricted and different ways must be utilized to make your connections with relationships. Face time and Zoom meetings have been utilized instead of physical contact. This is due to the social distancing requirements needed to curtail the spread of the COVID-19 Pandemic. On the other hand it’s brought relationships under the microscope.

Couples being quarantined for two plus months has to take its toll. Mercury and Venus were in mutual reception for a month, April 28th to May 28th. Venus rules Taurus where Mercury is doing a timeshare and has to follow Venus’s rules. Due to the mutual reception Venus in Gemini has to bend the knee to Mercury. They are linked closely together for a month. Mercury is tethered and grounded in the earth sign of Taurus. Travel restrictions rendering Hermès wings clipped to honor the needs of the body. Then there’s mental health concerns like depression and loneliness, a result of the isolation from social distancing. Mercurial flights restricted to the four restrictive walls.

Let’s not forget the symbol for health, the caduceus.

The caduceus or the staff of Hermes, depicted as a stick entwined by two snakes and surmounted wings is the symbol of modern medicine. The Rod of Asclepius is a single serpent entwined rod wielded by the Greek God of healing and Medicine.

Venus in Gemini under the rulership of Mercury ties health concerns with travel and information.

When a planet goes retrograde, the energies it represents are said to turn inward, so it’s a good time to go within and see how your Venus is doing. Any external issues you have connected to Venus (like money, finances, possessions, relationships, creative projects) are a reflection of what you value. And what you value is a reflection of how you see yourself – your level of self-esteem and self-worth.

If Venus rules an angle in your chart especially the MC, then the Venus retrograde cycle brings, for you themes of review and redo regarding career.

Venus retrograde is going to be less troublesome in personal charts for the air element signs:

Gemini, Libra, and Aquarius. This is due to the grand air trine involving those signs. Venus in the communication sign of Gemini will express a bit less destructive to relationships. It’ll be a bit more flexible.

The signs that will have more difficulties during the Venus retrograde are Pisces and Virgo (it’s fall), as well as Sagittarius. This is due to the hard aspects to Gemini. The opposition from Sagittarius and the squares from Virgo and Pisces.

However on May 5th the Nodes of the Moon move out of the Cancer Capricorn Axis into the Gemini Sagittarius polarity.

This is some good news and a step in the right direction for those with strong Cancer-Capricorn placements that have had it hard for a while now. The Gemini-Sagittarius axis is about finding our place in the community, learning and communicating. It’s about socializing and traveling, so over the next two years, a lot of collective work will be done in these areas. The way we approach learning and socializing along with our beliefs about the world will be changing tremendously and the Moon’s Nodes marks this shift.

The Retrograde of Venus brings a focus to the need for curiosity and flexibility in communication. Third house issues of learning, local travel, siblings relationships, neighbors, neighborhoods, and near relations are being re-examined and assessed. Travel, local as well as foreign long distance, will be impacted at this seminal shift.

The nodes will shifted into Gemini/Sagittarius on May 5th 2020 and remain there until early 2022. Under this polarity we move into the realm of ideas and philosophy, with the South Node in Sagittarius releasing some attachment to the ideals of religion, and the North Node pulling us towards Gemini in which all ideas are welcome and there is less commitment to finding one Truth.  Since it’s the South Node of the past that will be activating the Sagittarius archetype, we will likely have to let go of some of the expansiveness of hope and optimism that ruler Jupiter has given the  global enterprise artificially afloat.  This is especially true in the U.S. which has Sagittarius rising used in the Sibley chart, a lot of us use that one for the natal chart of the United States. The U.S. will begin its Pluto Return next year.  The South Node was last in Sagittarius in October of 2001, just after 9/11 which led to a global contraction felt around the world, its effect was a  global economic downturn. Travel was avoided due to concerns of terrorism.  Perhaps it’s not a coincidence that the pandemic seems to be a trigger for a similar occurrence.

The nodal axis will make a challenging square to Neptune, denoting an event of mystery and deception and almost certain confusion. This will most likely effect the presidential election in November and a possible return of the COVID-19 virus.

The Distribution of the Covid19 Vaccine
2 replies