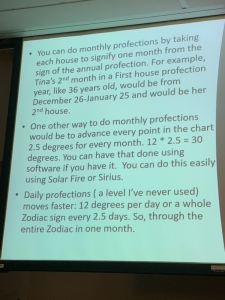 In October, the leader for our event was Sam Reynolds and he engaged us in a Predictive Astrology Boot Camp.

We started the day with the ancient technique of profections. The idea of profections is that every year, the focus is on a different area of life. To determine the area of focus for the year, you typically begin with the sign of the Ascendant. However, you can also profect from the Sun, Moon or MC. Whichever you choose, the first house, sign, and sign ruler are more significant in the 1st year of life (0 to 1), 12th year of life (12-13), 24th year of life (24-25) and so on in multiples of 12.

This particular technique relies on whole sign houses. To determine the profected sign and ruler of the year at the ages that are not multiples of 12, you count signs around the wheel until you get to the age you are looking for. When you find it, think of the significations of the house and the sign. The area of life represented by the profected house wants to be expressed in that year.

Sam gave us multiple ideas to go further than house significations while thinking of the meaning of the profected year. An interesting one was to compare the qualities of the sign of the profected ascendant to the qualities of the sign of the natal ascendant. If the elements are incompatible, it may be more of a struggle, but you’ll be motivated to get through it and progress. Is it an angular house? A profected angle is not as potent as a natal angle, but still brings additional significance. Other ideas were to look at the planets in the profected house, the ruler of the profected sign and the opposite house and sign for the additional insights they may bring.

We saw multiple chart examples and also had some time to work together with a partner to determine our own profected sign, house and ruler of the year and to discuss what it might mean in our life.

We also learned about calculated profections to focus on months or even days instead of an entire year.

The natal chart is primary. Aspects in a solar return chart are significant when they can be tied back to your natal chart. Look for repeating degrees. Remember that the sun or moon will always try to express the themes of their natal position. The solar return positions impact the way they will try to fulfill those intentions. Elemental differences and other factors of compatibility between the natal chart and the solar return chart can also provide insights for the upcoming year.

We looked at several example charts for solar return and also learned how we would use the profections with the solar return reading.

The final technique we had time to cover was progressions. Sam defined and explained several different types of progressions, but the majority of the focus was on secondary progressions. Secondary progressions consider the position of the planets in a person’s first few months of life. The idea is that one day of planetary movement in these formative days applies to one year of later life.

Sam listed several significant events in a progressed chart including sign changes, aspects, phase changes and change of movement and we also looked at a typical chart example.

We also learned about the Lot of Fortune, Progressed Lunar Returns, and more.

It was a great day. Join us for the next one!