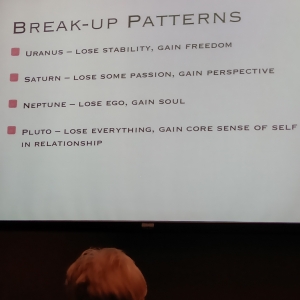 In November, Armand Diaz was the speaker at our event.  In the morning, we saw a presentation on collective perceptions of love and sex since the discovery of Neptune. Neptune was discovered around 1846, but no one knows the exact date, which is interesting due to Neptune’s significations and reputation for making things a little harder to discern.

The first time period we discussed was the Romantic Era just prior to Neptune’s discovery. Neptune fits the music and sentiments of the Romantic period, which was a contrast to the progressive period before.  Armand drew a parallel between these periods and a similar contrast in the significations of Neptune and Uranus.

Then, Armand went through each sign and presented a book or movie that fit the mood in the years that Neptune was in that sign. While most of the focus was on Neptune, Pluto and Uranus were also brought in as they also influenced the times we were discussing.  The presentation included changes in attitudes towards sexuality, including homosexuality, and also changes in how we think about relationships and the role of women in the work place.

The correlations were presented in a visual way as we saw the evolution of a story as it was portrayed in different eras with different book covers or movie posters.  We saw that female fashion reflects the sign that Neptune was in and the same held true for Pluto’s influence on the masculine images in society.

The stories, music and fashion were a fun way to illuminate the impact of the outer planets on our collective mood.

In the second half, we talked about the astrology of divorces, breakups and partings. Armand cautioned us that in must cases, you cannot predict breakups – and when you can, you still probably shouldn’t. What you can do is describe something of how they will feel or play out.  You can help to frame their meaning.

Another interesting warning is that you can’t assume what’s good and what’s bad. The breakup may be the desired outcome.

Then Armand gave us some ideas of what to look at to get a relationship pattern of the person, including Venus, the Ruler of the 7th House, Planets in the 7th, the Sun, the Moon and Mars.  After describing how we might interpret those to learn more about the people involved, Armand explained that Uranus, Saturn, Neptune and Pluto will describe the relationship and the breakup.

It’s important to note that the dominant planet may be different for each partner, so they can see things in completely different ways.  We looked at some chart examples for a relationship and both participants to see how the chart can help us understand the dynamics involved.

Another interesting point was that people can first connect with each other during a significant progression or transit.  If the natal synastry isn’t there, these relationships may fade away as the influences that brought them together shift.

Armand also described how the aspects in the charts describe the dynamics of the breakup.

Towards the end of the day, we discovered how Saturn, Uranus, Neptune and Pluto impact the flavor of the breakup. Uranus can be sudden and surprising, even to the person initiating the breakup. Saturn has a matter of a fact quality and can involve depression. Neptune breakups can take a long time, too long, because you don’t want to let go. Pluto can involve power struggles and emotional control issues.  It can last a long time, even if you want it to end.

We did a few more chart examples to demonstrate these concepts and ended the day.  It was very insightful and enjoyable day.  Join us for the next one!